A rising cost of motoring is beginning to hit Britain’s poorest drivers, with 800,000 motorists spending at least 31 per cent of their disposable income on buying and running a vehicle, according to figures recently released by the Office of National Statistics (ONS).

The RAC Foundation says that the average spend on motoring across all car-owning households is around 15 per cent of total expenditure, almost half of that of the poorest households.

Want to know how much you’ll get for your vehicle? Click here for a free quote

Professor Stephen Glaister, director of the RAC Foundation, said: “For the poorest car owners, there is little opportunity to cut motoring costs further. They’ll already be driving as little as they can and will have cut back on things like maintenance.”

A recent survey by Moneysupermarket.com found that 43 per cent of respondents had to reduce how much they drive because of rising costs, while 6 per cent were forced to give up their cars completely.

The ONS’ figures show that motoring costs have risen well above the cost of living over the past ten years, as shown by the graph below: 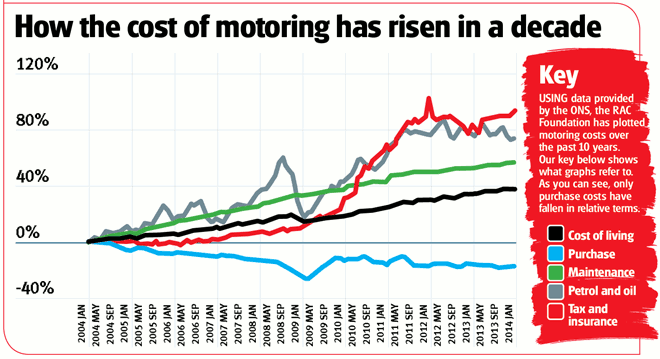 While the purchasing price of vehicles has been fairly flat, the price of petrol has continued to rise, as a result of higher oil costs and a diminishing global supply. However, petrol prices recently fell to a three-year low, with diesel dipping below the 130p per litre barrier for the first time since 2011.

Tax and insurance have also grown rapidly, with the Government hoping to increase revenues and insurers reacting from growth in risk and claims.  In 2009-10, Government revenue from fuel duty amounted to a whopping £29 billion, around 6 per cent of total revenue.

One way for motorists to reduce their monthly outgoings is to invest in ultra-low carbon technology, particularly electric-powered vehicles, whose fuel is around a sixth the price of petrol, while being exempt from car tax and congestion charges.

Although the cost of electric vehicles is higher than conventional petrol engines, as a result of the low numbers currently manufactured - The Nissan Leaf is currently available from around £20,000, with the Government providing a £5,000 subsidy – buyers usually recoup their costs fairly quickly.

If you are thinking about investing in a new vehicle, why not take advantage of ASM’s scrap and recycling services, allowing you to exchange your old vehicle for cash.