How long will petrol costs continue to fall? 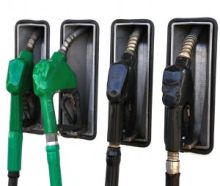 As a result of continuing drops in the price of crude oil, consumers in the UK have been benefitting from lower and lower prices at the petrol pumps.

Asda, Morrison’s, Sainsbury’s and Tesco have all reduced the price of both petrol and diesel by a further 2p recently.  At ASDA, this has led to prices as low as 103.7p per litre for petrol, and 110.7p on diesel.  One garage in Birmingham has started selling petrol at 99.7p per litre.

So just how long will the drops continue?

Why are the prices falling?

As noted above, the reduction in cost is due to the continual fall in the price of crude oil.  With supply outstripping demand around the globe, prices have fallen from $115 per barrel in June to what Goldman Sachs has estimated could be as low as $40 per barrel over this summer.  As a result, petrol retailers have been able to pass their savings onto consumers.

What has the impact been?

This continued fall has had a positive impact on consumer finances, with the Telegraph noting that it could act like a one per cent income tax cut for some families.  A study indicated that families in rural areas could end up as much as £770 better off each year.

Overall, total savings could out-strip the estimated £500m that consumers are set to save as a result of recent energy price cuts.

Goldman Sachs analysts have predicted that Brent crude will probably start to rebound out of the trough in the second quarter of 2015, but they have highlighted that it will probably take longer than that for demand and supply to balance out.

“To keep all capital sidelined and curtail investment in shale until the market has rebalanced, we believe prices need to stay lower for longer.”

Simon Williams from the RAC motoring organisation, spoke to the BBC:

“With a barrel of oil now costing around $47, we are surely only weeks away from the milestone price of £1 a litre being a common sight at petrol stations up and down the country.

“This will doubtless have a very positive effect on the average price of both petrol and diesel for motorists everywhere.

“As the current oversupply of oil is believed to be part of a long-term Opec strategy to keep oil prices low, there is every reason to think that motorists may well enjoy low prices for some time to come. “

Are taxes too high?

A major concern for consumers is that the fall in crude oil prices means a large amount of the money being paid is tax.  If a barrel of crude oil is $40 and the pump price is £1 per litre, the amount of tax being paid is 75 per cent.  Brian Madderson of the Petrol Retailers Association is planning to request the Treasury lower tax by two per cent.